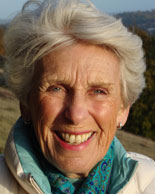 Christian Science has been central to my life for as long as I can remember. As a result of reading the Christian Science textbook, my mother was healed of a life-long, incurable skin disease. Before my birth, my parents were told they could not have children, but through dedicated prayer my mother found she was expecting a child and I appeared on the scene. Two years later my brother joined the family also!

As a child, love for God and healing were never far from my thought and during college the practicing of Christian Science became a natural part of my life. I married my wonderful husband, and in 1977, as a young mother with two small children, I went into the public practice of Christian Science. Years of happy family life followed, interwoven with an active public healing practice. In 1985 I became a Christian Science teacher--inspiring work which I have done for the last 25 years.

I have a son and a daughter and five grandchildren.

I am still doing what I have always held most dear – praying, healing, and helping others understand God better. What a privilege this is!