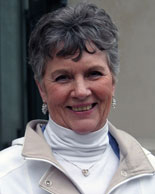 Because my mother was such a faithful church-goer, I received my first Bible at the age of three for perfect attendance in a protestant church Sunday School. That record continued until high school when I went to work for a hospital on weekends. I missed church so much I began attending a chapel in the hospital on Sundays. There I felt a closeness to God that surpassed anything I had experienced up to that time. I soon converted to that faith.

Various dark and difficult struggles gradually drew me away from church-going. By the time I found Christian Science several years later, I had given up on traditional Christianity, exploring Eastern philosophies and practices instead. When I first read the Christian Science pamphlet “God’s Law of Adjustment” (that a co-worker gave me), I immediately knew I’d found what I’d been looking for all my life—the explanation of existence, a way to truly know God, and a real reason for living. Healings quickly followed.

In 2009—born of a deep desire described so well in the hymn that begins I love to tell the story of unseen things above—I became a Christian Science teacher.