How Do You See the World? experience

A montage of photos—a global portrait of faces from the pages of The Christian Science Monitor—welcomes you to a new experience at the Christian Science Plaza. “How Do You See the World?” offers stories and experiences that explore progress and possibilities throughout the world as you consider your own place in it.

The Library provides public access and context to original materials and educational experiences about Mary Baker Eddy, the Discoverer and Founder of Christian Science. It tells of her life, ideas, and achievements, and houses a significant collection of rare and historic Bibles of notable importance.

Reading Rooms around the world have been serving the spiritual needs of their communities since 1888. The Mother Church Reading Room invites everyone to stop by to ask questions, sample or buy Bibles and Christian Science books and literature, and to attend weekly events.

Find out about Plaza construction updates

Music on The Christian Science Plaza

Enjoy organ music, a solo that supports the spiritual message of the sermon, and hymn singing during church services, plus outdoor chiming concerts all year around. 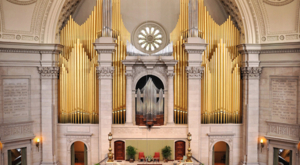 The Organ of The Mother Church

There are two organs built by the Aeolian-Skinner Organ Company of Boston at The Mother Church: one in the Original Edifice and one in the large-domed Extension of The Mother Church. The organ in the Extension is one of the largest in the world with a total of 13,384 pipes, ranging from the size of a pencil to 32 feet in length. It is played from the four-manual console located in front of the platform.

Chimers of The Mother Church

The bells are played by musicians who are members of The Mother Church. You can hear chiming ringing out over the Plaza at the following times: