Read Science and Health with Key to the Scriptures in Chinese

Mary Baker Eddy's Bible-based discovery of the principles of Christian Science are fully explained in her major work, Science and Health with Key to the Scriptures, which is now available as a draft translation online in Chinese.

An avid student of the Bible, Mrs. Eddy wrote Science and Health with Key to the Scriptures and 16 other books, founded several magazines, The Christian Science Monitor daily newspaper, and established the Church of Christ, Scientist.

If you have Chinese language experience, please offer comments on how the translation can be improved. All comments and suggestions will be considered for incorporation into subsequent draft translations. Use of the site is complimentary. To support your study of this book and of Christian Science, we also offer other Chinese language resources, including articles published online in the The Herald of Christian Science. 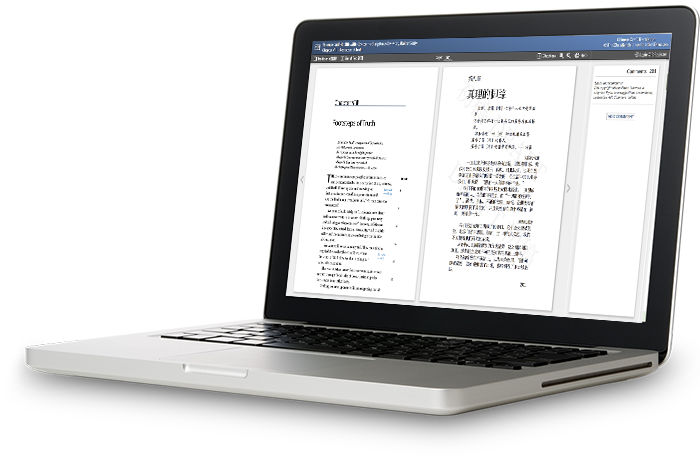 What does it mean to be a “draft translation”?

Volunteers who are native speakers of Chinese have worked together with the support of The Mother Church to create this translation. These translators, including those in many other languages, often begin by translating the Bible Lesson for holding church services, and eventually transition into translating all of Science and Health.

Even though shared publicly, a draft translation is not considered final. We expect feedback from readers will result in more edits to the translation — ultimately making it a stronger representation of Mrs. Eddy’s work.

Why doesn’t the Cross and Crown or Mary Baker Eddy’s signature appear with this book, as it does with other translations?

The design of the Cross and Crown and the facsimile signature of Mary Baker Eddy are trademarks of The Christian Science Board of Directors, and are registered in the U.S. Patent and Trademark Office and in other countries. They only appear on final, authorized translations. Since this manuscript is still a draft, those recognizable marks will not be used until the final manuscript is printed.

What Bible translation is used for the quotes in this draft translation of Science and Health?

The Chinese King James Version of the Bible is quoted in the draft translation.

Why are the marginal headings found in a different place than in the English original?

Formatting limitations in this draft translation require Marginal Headings to be placed at the start of the paragraph in which they appear embedded in the English.

How are italics rendered in the translation? 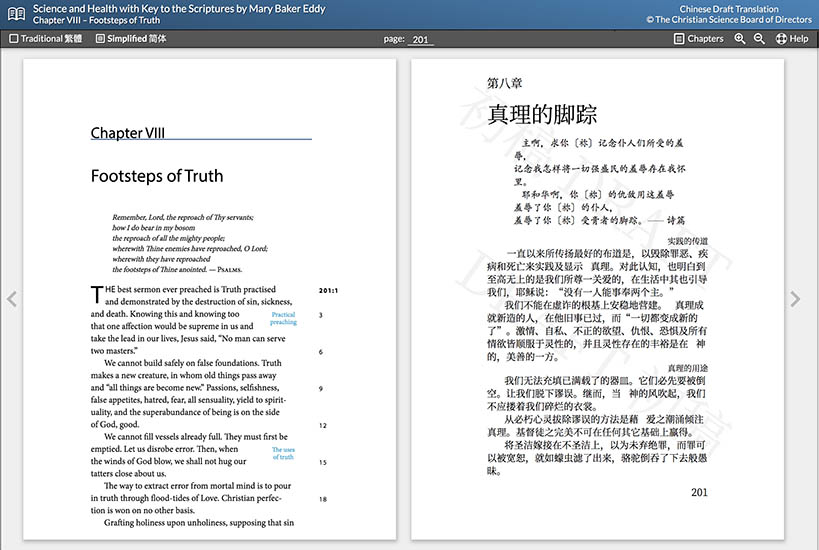