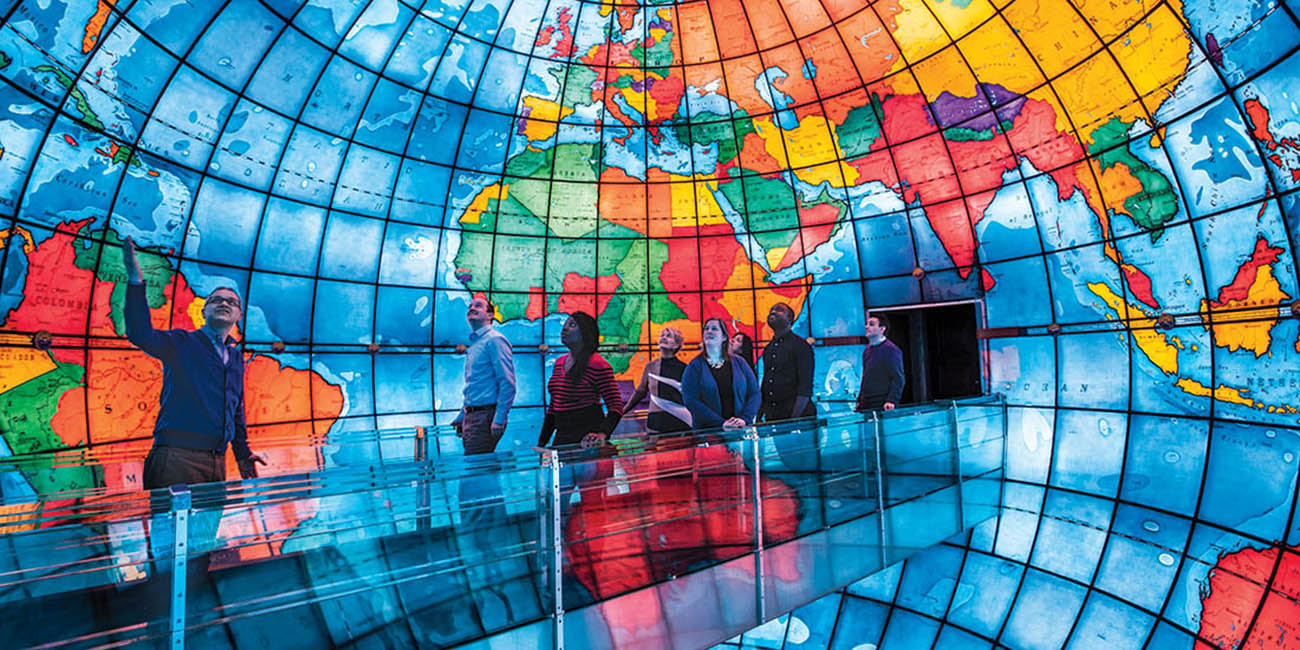 Plan your visit to this world-famous, three-story, stained-glass globe—one of the key attractions at The Mary Baker Eddy Library. The Mapparium’s three-dimensional perspective of the world of 1935 is enhanced by A World of Ideas, an original presentation that features a rich orchestration of words, music, and LED lights to illustrate how ideas have traversed time and geography and changed the world.

The Library is also showing a complementary exhibit, “The Mapparium: An Inside View,” featuring letters, documents, and artifacts never before made public. These showcase the construction, history, and significance of this magnificent architectural and artistic achievement.

The Mapparium was conceived by the architect of the Christian Science Publishing Society building, Chester Lindsay Churchill, as a symbol for the global outreach of The Christian Science Monitor. Mary Baker Eddy founded the Monitor in 1908 and gave it the mission “to injure no man, but to bless all mankind.”

Originally called “the Glass Room” or “the Globe Room,” Mapparium derives from the Latin words mappa (relating to “map”) and arium (“a place for”). In the early 1930s, architect Chester Lindsay Churchill visited the headquarters of the New York Daily News. There he saw a 12-foot globe in the lobby. He liked the idea of a newspaper having a globe to indicate its reach and scope, and suggested to the Building Committee of the Christian Science Publishing Society that a Mapparium would symbolize the international character and “world-consciousness” of the Publishing Society’s activities. The Mapparium was three years in the making (1932-1935). It opened to the public May 31, 1935, and cost $35,000 (at a time when a Hershey bar cost about five cents), including all labor and materials. Originally, Churchill designed the glass panels to be replaceable as the political boundaries of the world changed. There have been several points in the Mapparium’s history where the discussion of updating the map did arise. The final time was in the 1960s, when it was finally decided that the Mapparium is a priceless historical work of art and should never be updated.

The first major renovation of the Mapparium began in 1998 and took four years to complete. Krent/Paffett Associates of Boston used the “Color Kinetics” lighting system in the exhibit, creating a way to tell stories in the globular space. Kevin Brown of Brown Innovations designed the four-speaker sound system, solving the problem presented by the Mapparium’s unique acoustics. As the first step in renovation, the entire globe was temporarily covered in plywood while heating, ventilation, and air conditioning systems were upgraded. In 1935 the Mapparium had been illuminated by roughly 300 40- and 60-watt electric light bulbs placed outside the sphere. In their place 206 LED light fixtures were installed, which could be programmed to produce up to 16 million colors. This new programming produced many different effects. For example, an all-blue array caused the continents to recede into silhouette and the oceans to come forward (shifting attention from the geopolitical map to geographic forms). LED panels are environmentally friendly—even if left on 24 hours a day, they would last for years. A television monitor for multimedia presentations replaced the original window from the Publishing House Lobby. Another significant upgrade to the Mapparium’s lighting occurred in 2015. Over a period of four weeks, Focus Lighting of New York City refitted the space with 175 new LED fixtures. In addition to red, green, and blue colors, amber and white were added. The number of lumens per fixture increased from 460 to 1372, providing dramatic new brightness. A new control system was installed, and workflow was upgraded so that program content can now be designed, produced, and implemented in a fraction of the former time and at no additional cost. To clean the glass in the Mapparium, a cherry-picker is set up in the middle of the bridge. Workers go out on the machine’s arm and clean each panel with a gentle solution.

The shape of the Mapparium creates unusual sound effects. When people are speaking near the center of the room, their voices are much louder than usual. This is because the curved glass walls do not absorb the sound waves produced by the voice, but reflect them back. Spherical rooms like the Mapparium are known as “whispering galleries.” Usually these are of the cylindrical type, and the acoustics are fairly simple. The Mapparium, however, is almost spherical, producing a more complex type of acoustics, as well as a very efficient transference of sound. In a spherical space, the sound starting near the center of the sphere returns to its source. Sound waves that originate off-center travel around the sphere and arrive at the opposite end simultaneously. That’s why those at one end of the bridge can hear the whisper of those at the opposite end—loud and clear—while a listener standing in the center (such as on the bridge running through the center of the Mapparium) hears a much weaker sound.