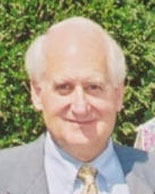 This led me to become a member of The Mother Church as a teenager. A quick healing of a diagnosed ear infection enabled me to pursue my love of swimming, becoming All-American in high school. I joined the Christian Science College Organization at Michigan State University, while majoring in Hotel Management. More healings led to having Primary class while in college.

Service in the U.S. Army took me to Harrogate, England, where I joined and served a branch church. My desire to “give back” to Christian Science resulted in becoming a listed practitioner in 1966. My wife and I were sent by The Mother Church to Ft. Benning, Georgia, where I served as a Christian Science Minister for the Armed Services. After that I became administrator of the Christian Science nursing facility in Cleveland, Ohio, which cultivated a continuing deep appreciation of our nurses’ vital work.

Our family grew to include three children. I became a Christian Science teacher in 1973 and later lectured. We moved to Boston when I was asked to manage the Practitioner, Nursing and Armed Services Department for The Mother Church, and later became Chairman of the Board of Lectureship.

My wife, a former high-school English teacher, is a Journal-listed practitioner. Although we live on the coast of Maine, I hold class and association in Cleveland, Ohio.