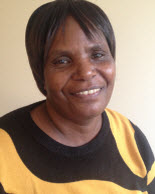 Healing in Christian Science can never be compared to anything else here on earth. Christian Science indeed has enabled me to prove that "God is our refuge and strength, a very present help in time of trouble."

My early years were spent in Eastern Province of Kenya, with my parents and three brothers and five sisters.  We attended the Presbyterian Church. Later I moved to Nanyuki where I lost a dear friend. With this loss, I also met a new friend who offered me a Christian Science Sentinel, which led me to the truth of divine Science. The Bible citations given and those from Science and Health with Key to the Scriptures by Mary Baker Eddy were indeed a blessing.

I was healed of tropical malaria and grief by reading this angel book, Science and Health, that came into my life in time of need. After telling others about the book that heals, four of us started a group in a friend’s house, until we later moved to a public place and became a Society, which is now First Church of Christ, Scientist, Nanyuki, Kenya. Due to my desire for an increased understanding of God, I took Primary class instruction in 1991.

In 1994 I gave my life to the full-time public practice of Christian Science, where indeed I have found the greatest help and comfort. I cannot express my gratitude for the knowledge and understanding I have gained of God. In 2012 I became a teacher of Christian Science.