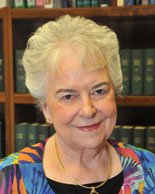 Having grown up in Hialeah, Florida, where the local branch church started on our front porch, Church was always at the focal point of my thought. My father was healed in five days of a rare blood disease from having contracted malaria while setting up Pan American Airways in Brazil. My mother went from having been the first woman pharmacist in Florida to being a Christian Science practitioner.

Meanwhile, I received a flute scholarship to Louisiana State University, where I served as Christian Science Monitor Representative, selling Monitor subscriptions for classroom use. I continued that in Big Spring, Seguin, and Bellaire, Texas. The close link with The Mother Church gave me an inspired vision of true Church. I served as First Reader, Sunday School teacher, organist, Chaplain for Harris County Jail, and on the Board of Trustees among other duties. At that time, I was teaching elementary school, was Principal of a two-teacher school, and taught piano and flute.

As calls for the practice came, I became a Journal-listed practitioner (1978), served as Field Assistant for The Mother Church (1983-1987), took Normal class (1988), began as speaker for the state Committee on Publication (1989), served on the ethics panel for Institute of Religion at TX Texas Medical Center (1993) (spoke to doctors, nurses, pre-med students and chaplains), and was on the Board of Lectureship (1994-1997).

I met my husband when we played in the Midland Symphony. We have two married daughters, a grandson and granddaughter.